An extraordinary new affordable/supportive housing development in the Bronx. 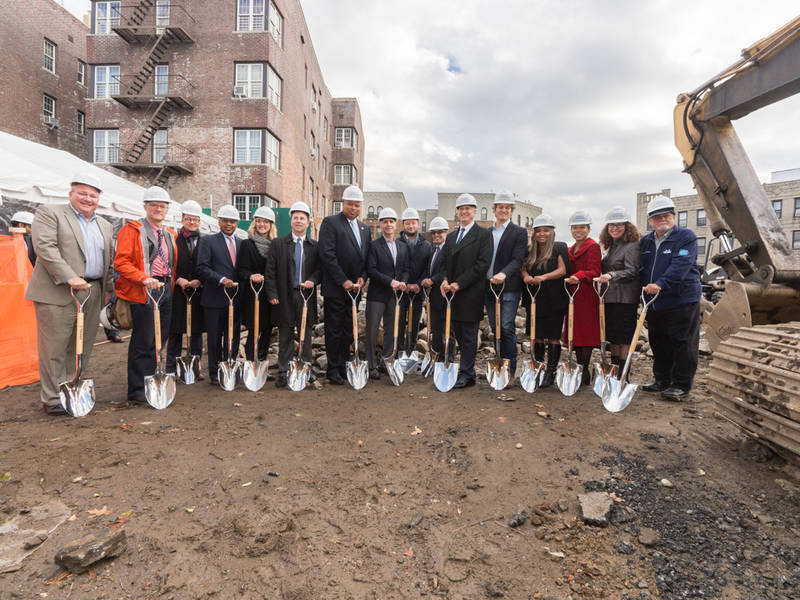 Fifty city, state, federal, and private sector partners gathered on the construction site of Bedford Green House, an extraordinary new affordable/supportive housing development for the Bedford Park section of the Bronx that will feature, a living green façade, an interior green wall, and a rooftop aquaponic system to raise fish and produce in addition to a teaching kitchen, a community playground and a landscaped garden. The 13-story Bedford Green House will be built in two phases, with 118 units going up now and 90 units later. But that’s not all that’s new and exciting about the project, as Project Renewal CEO Mitchell Netburn pointed out in his welcoming speech: “Bedford Green House continues the organization’s 50-year history of “firsts” including the first outreach to homeless alcoholics, the first non-hospital detox, and the first shelter for LGBTQI young adults. Bedford Green House will be Project Renewal’s first project to serve families.”

On hand to celebrate was Lynne Patton, HUD Regional Administrator for New York and New Jersey who quoted project consultant Jonathan Rose: “today we stick shovels in the ground to build gardens in the sky.”

HPD commissioner Maria Torres-Springer pointed out that the project embodies the Mayor’s newly released Housing 2.0 Plan, both by creating much needed affordable and supportive housing and through its dependence on a mission-based nonprofit as its developer/owner.

Assembly Member Jose Rivera strongly supported the project and the mission behind it, telling attendees that he too had been homeless when his family first came here, “and, if it wasn’t for people like you…”

Also deeply moved was Chris Johnson, the CEO of Hollister, the contractor for Bedford Green House, who told participants that the project was an embodiment of the precepts his mother instilled in him: “You have to give to live.”

Fred Harris of Jonathan Rose quipped, “If it takes a village to develop affordable housing, it takes a medium sized city to develop supportive housing.”