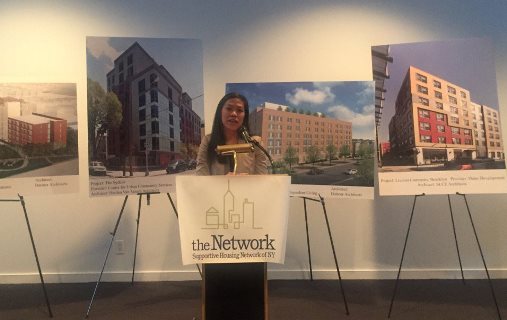 Network members gathered on the evening of March 9 at Scandinavia House for the Network’s Annual Meeting. Nonprofit providers, architects, developers and other members of our community came together to meet, mingle and hear about the past year’s accomplishments.

Newly-appointed HPD Commissioner Maria Torres-Springer addressed the 100 attendees before dashing off to attend a Town Hall meeting in Brooklyn. She expressed her delight at being named Commissioner, noting that although she had not worked specifically in housing, she had a long career in community and economic development most recently as Executive Vice President and Chief of Staff of the NYC Economic Development Corporation, as well as at her very first job in New York City working at  LISC.

Ms. Torres-Springer also spoke movingly about her lived experience of the importance of stable housing, having grown up  in Section 8 housing. She recounted how terrified her entire family became on the day of annual Section 8 recertification, knowing if it did not go well, her family would become homeless.  She effusively praised Network members, pictures of whose new residences graced the room, for the spectacular work they do every day housing New York’s most vulnerable individuals and applauded the Network as a national model for supportive housing advocacy.

Executive Director Laura Mascuch then welcomed members and gave an update on the Network’s accomplishments in 2016 ending with a call to stay strong in the face of what will unquestionably be enormous challenges in 2017. But, she concluded, “we’ve always been fighters.”  Executive Director of Concern for Independent Living Ralph Fasano stood in for Network Board Chair Bill Traylor in welcoming guests, and, as Board Treasurer, presented the Network’s financials. Guests spent the evening networking, marveling at the beautiful new residences adorning the walls and showcased in a slideshow, as well as checking out a slideshow of photos from openings and other events from 2016. Catered by the incomparable City Beet Kitchen, the event once again reminded us how lucky we are to represent this stellar community.