The NYS Assembly and Senate released proposals for the state budget that broadly maintained or added funding for capital and services/operating costs for supportive housing.

On March 13th, the New York State Assembly and Senate passed their budget bills, and began negotiations with the Executive office with the aim of passing a finalized budget by April 1st. For the latest information on the Prevailing Wage legislation, please visit this page.)

In general, both houses either agreed with the Governor on both capital and services/operating funding levels or made funding additions. There were no proposed cuts.

This indicated that there should be some increase over the $10 million the Executive proposed (and it was unclear what that might be at the time of the budget proposals). 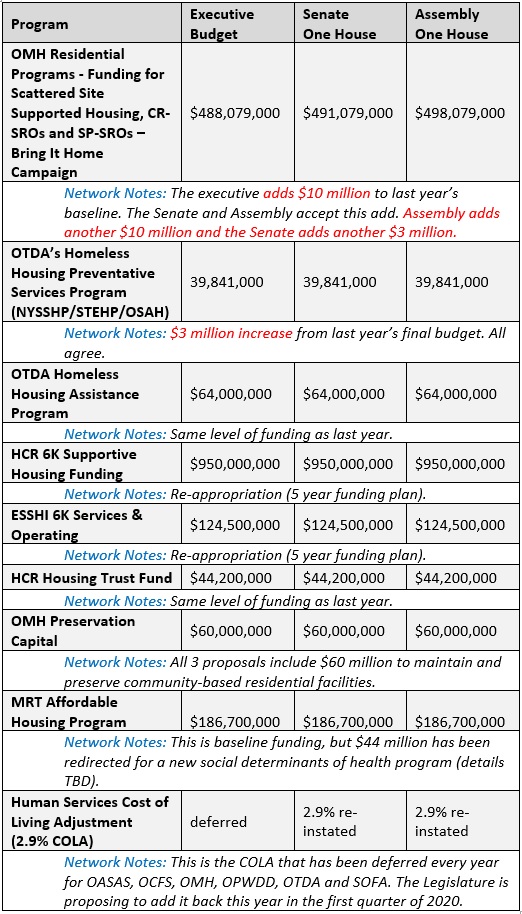 PREVAILING WAGE PROPOSALS EMERGE IN BOTH ONE HOUSE BUDGET BILLS

Both houses included language on requiring prevailing wage for both construction projects and building service workers.

Both houses included language that supports new prevailing wage requirements for public works as outlined in bill A1261/S1947-Bronson/Ramos. Public works is defined broadly and includes affordable housing, exempting construction performed on a multiple dwelling where at least 75 percent of the residential units are affordable for households earning up to 60 percent AMI.

The Senate also included language in their resolution that acknowledged a desire to address affordable housing concerns:

“The Senate believes prevailing wage should be paid on projects supported by public dollars. However, the Senate acknowledges legitimate concerns by various stakeholders and supports all stakeholders coming together to negotiate a mutually agreeable outcome. The final proposal should recognize regional cost differentials among the state, recognize the unique nature of Industrial Development Agency and Local Development Corporation Incentives, ensure development of all regions of the state continues, preserving opportunities for MWBEs and preserve the development of affordable housing.”

Both houses proposed language that would require all projects that utilize $1 million or more of financial assistance to pay building service workers a prevailing wage. It closely mirrored the proposed NYC legislation, Intro 1321, but specified projects must have over 30 units to trigger the requirement. The state language also applied the requirement to property management staff, and the definition of building service worker was broader than the city’s.

The Senate also again stated their willingness to negotiate a mutually agreeable outcome that addresses the above stated concerns, including the impact on affordable housing.

Putting this language in both one house budget proposals signaled a desire to negotiate a prevailing wage component as part of budget negotiations. The Governor in his State of the State address mentioned that all construction projects with public subsidies should be subject to prevailing wage but did not include details. There was also no appropriation language attached to both proposals, so without additional funding to support a prevailing wage mandate, it would impact the number of affordable/supportive housing units being developed and have an impact on the number of staff to be hired within a building.

The Network continues to work with members to understand the financial impact of the state’s prevailing wage for Building Service Workers proposal and will be communicating this impact to state officials and staff.

The Network also continues to advocate for an affordable housing carve out for both proposals.