Mosholu Gardens Opens in the Bronx 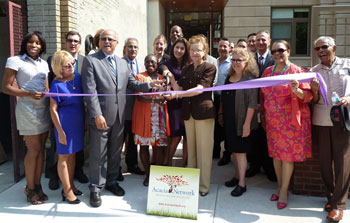 Some 50 staff, partners and supporters gathered on the roof of Mosholu Gardens to celebrate the opening of Acacia Network’s first supportive housing residence on September 12. This eight-story new construction overlooks Mosholu Parkway and provides 63 efficiency apartments for a mix of homeless and low-income individuals.

Ralph Declet, Acacia Network’s Vice President of Economic Development, acted as master of ceremonies for the day’s event. Mr. Declet introduced Acacia Network CEO Raul Russi and Board Chair Milagros Baez O’Toole, both of whom marveled at the beauty of the building and the teamwork that brought it into being. Jessica Katz, Assistant Commissioner for Special Needs Housing at the NYC Department of Housing Preservation and Development (HPD), thanked NYC Council Member Oliver Koppell and the members of Community Board 7 who supported the project. She also took a moment to point out that, although HPD had been able to make good on its commitments to this project, the department lost $42 million in Section 8 funding this year due to sequestration.

“Next time we might not be so lucky,” she said.

Gail Wolsk, Director of Housing Services at the NYC Department of Health and Mental Hygiene (DOHMH), congratulated Acacia on its first supportive housing project. DOHMH will fund the on-site servces at Mosholu Gardens. Also on hand to offer kudos were CSH’s Jennifer Trepinski and Lisa Deller of the National Equity Fund (NEF).

Several of the day’s speakers referenced the difficulty Mosholu Gardens faced in getting built. The residence was constructed on an empty lot that featured A LOT of rock -- even for the Bronx -- and a twenty-foot slope often referred to as a “sheer drop.” Assistant Commissioner Katz wisecracked to the building’s architect and builder, Rich Vitto of OCV Architects and the J. Pilla Group, “You guys should know better by now.” It wasn’t until guests saw the enormous 20-foot rock outcropping that graces the ground floor terrace that visitors could appreciate how extraordinary the building really is. 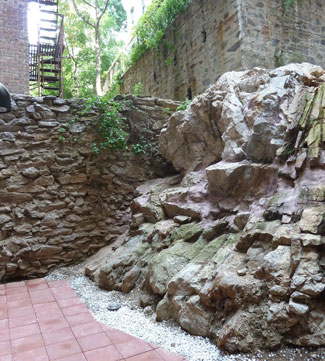 As visitors snapped pictures of the huge rock, someone asked whether it was true that the project was completed within 18 months, Rich Vitto beamed and said simply, "Yes, on time and on budget."

Congratualations to Acacia and all the partners who helped build this new residence!