“No one is going to be thrown out on the street,” 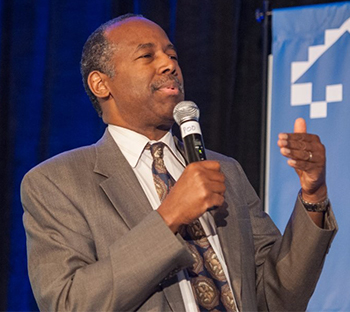 Secretary Carson assured the audience that “no one is going to be thrown out on the street” on his watch. In response to concerns about the administration’s proposed $6.2 billion cuts to HUD, he referred to a future infrastructure bill and explained that it would include a significant investment in housing. Carson also spoke about the importance of finding efficiencies in government programs and fiscal conservatism in light of the national debt.

In a speech that stood in stark contrast to Secretary Carson’s, Representative Waters spoke about her proposed Ending Homelessness Act of 2016, a $13 billion five-year initiative to fund housing and services for the homeless. The proposed legislation would permanently authorize the McKinney-Vento Homeless Assistance Act and the U.S. Interagency Council on Homelessness. The latter program, which coordinates 19 federal agencies in a joint effort to end homelessness, would be eliminated by Trump’s proposed budget. Like New York City, Waters’ home district of Los Angeles has also seen homelessness increase, even as figures nation-wide have declined slightly.