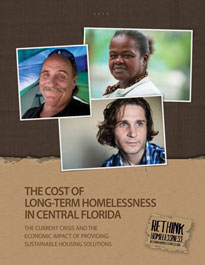 A report from Rethink Homelessness found that providing a homeless person with supportive housing costs taxpayers three times less than leaving a homeless person on the streets. “The Cost of Long-Term Homelessness in Central Florida” echoes the existing research, which has shown that supportive housing both provides formerly homeless individuals with safe, stable homes and saves taxpayer dollars.

The report led to stories on the cost-effectiveness of supportive housing in Vox, Think Progress, PolicyMic, the Orlando Sentinel and other media outlets.

The study looked at a group of 107 chronically homeless individuals in Florida. The researchers found that each person while homeless cost $31,065 per year in inpatient hospitalizations, emergency room fees, incarceration and other systems associated with homelessness. By comparison, the report finds that supportive housing for chronically homeless individuals in Central Florida costs just $10,051 per person per year – a 68% reduction in community costs.

“A new study is out providing support to one of my favorite ideas in public policy — that the best way to deal with the challenge of homelessness is to give homeless people homes to live in. To some it sounds utopian and it's natural to worry about the cost, but a great deal of evidence suggests that it would be cheaper to house the homeless than to let them languish on the streets and deal with the aftermath.”

We urge you to read and share this latest piece of research on the benefits of supportive housing.