Private Sector Partner of the Year 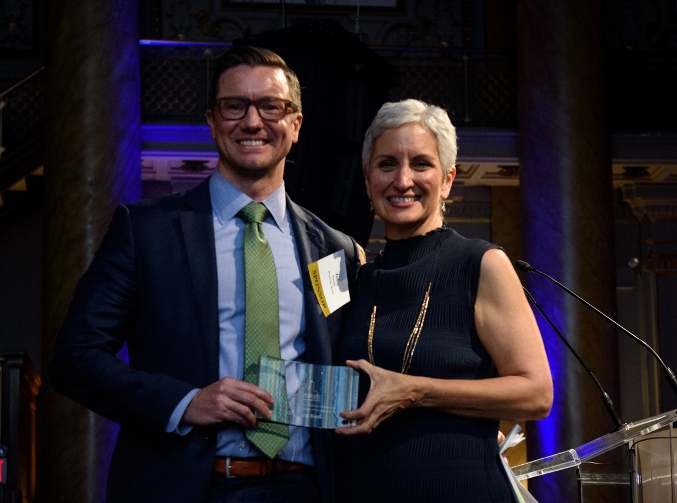 Deutsche Bank has been a huge champion of supportive housing virtually since the model’s inception, first through the innovative work of Gary Hattem who led DB’s community reinvestment work -- a program that in the last three years alone has invested $45 million in supportive housing projects in the City and $2.5 billion in affordable and supportive housing nationwide since inception. But that was just the beginning: in 1998, recognizing the dearth of funding available to cover early development costs, Deutsche Bank launched the Supportive Housing Acquisition and Rehabilitation Effort, or DB SHARE, which provides three years of funding to cover a range of pre-development needs. Since then, DB has committed more than $17 million in seven rounds of awards, jumpstarting development of 8,500 units of supportive housing.  Project Renewal’s Mitchell Netburn said: “DB SHARE provided critical early stage funding for our newest 208-unit project in the Bronx, Bedford Green House, as well as many other important projects over the past decade.  We thank Deutsche Bank for enabling us to make our vision a reality.”

DB is also a founding partner of the New York Acquisition Fund allowing nonprofits to purchase properties outside their agency’s economic reach. The Fund has made $370 million in loans to 66 projects, a third of them supportive.

DB has also been involved in policy especially through the work of DB’s Vice President of Philanthropic Initiatives, John Kimble, who is accepting the Private Sector award on Deutsche Bank’s behalf. John has actively participated in numerous coalitions that DB funds to address homelessness, working to involve other funders. DB has also taken a lead in funding ground-breaking systems change work– including the Coordinated Assessment and Placement System (CAPS) and, funding a wholly new position in the Mayor’s Office to coordinate efforts to address youth homelessness.  Maryanne Schretzman, Executive Director of NYC’s Center for Innovation through Data Intelligence and lifelong advocate says, “Deutsche Bank's generous funding will support work to build strategic partnerships among city agencies, not for profits, advocates and young people to collectively address youth homelessness. John reminds us of the simple idea that when we work together and don't give up on our youth -- especially those who are homeless --they don't give up on themselves.”

For its unwavering creative support of the supportive housing community we are delighted to present this year’s Private Sector Partner of the Year award to Deutsche Bank.