The Network Offers Analysis of the Final NYS 2019-2020 Budget

The final NYS budget was passed and largely reflected what was proposed by the Governor in January for the areas of housing and human services. The Network offered a budget analysis for its members.

The final $175 billion NYS budget passed early on April 1, 2019 and included big-ticket items including bail reform, congestion pricing, a permanent property tax cap, and a ban on single use plastic bags. In the areas of housing and human services, the final budget reflected largely what was proposed by the Governor in January.

Below is the Network’s summary and comparison chart of the budget areas important to supportive housing. 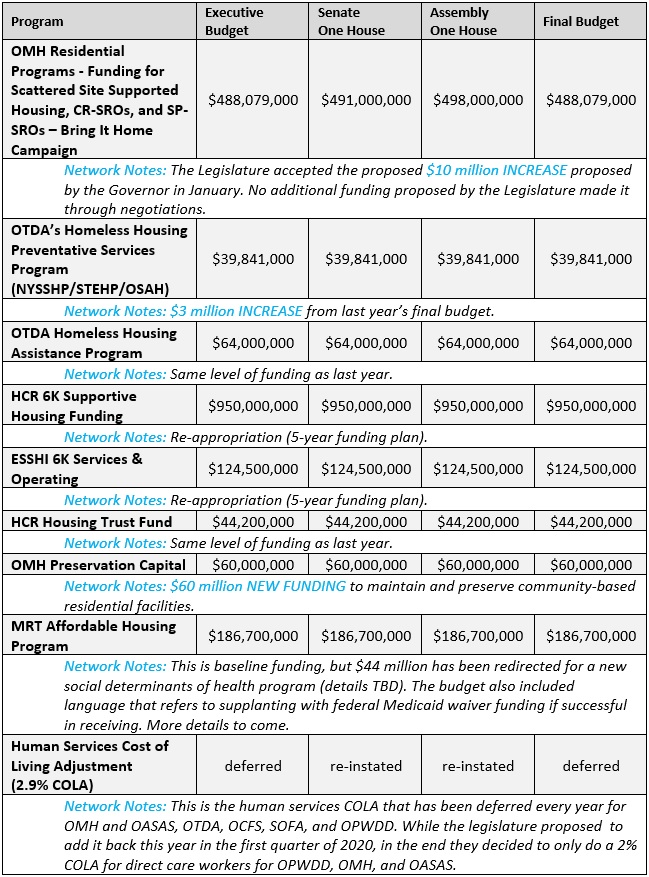 While both houses included language on requiring prevailing wage for both construction projects and building service workers, neither proposals made it into the final budget. While this is good news, both proposals are now stand-alone bills in both the Senate and the Assembly, so we will need to continue to advocate for an affordable and supportive housing carve out.

A1261/S1947 (Bronson/Ramos) propose prevailing wage requirements for public works. Public works is defined broadly and includes affordable housing, exempting construction performed on a multiple dwelling where at least 75% of the residential units are affordable for households earning up to 60% AMI.

A6964/S4630 (Crespo/Ramos) proposes language that would require all projects that utilize $1M or more of financial assistance to pay building service workers a prevailing wage. It closely mirrors the proposed NYC legislation, Intro 1321, but is statewide and specifies projects must have over 30 units to trigger the requirement. The state language also applies the requirement to property management staff, and the definition of building service worker is broader than the city’s. See the Network’s financial impact analysis HERE.

The Network continues to work with members to understand the financial impact of the state’s prevailing wage for Building Service Workers and expresses gratitude for everyone who helped educate the legislature in a very short time frame about its impact on supportive housing.

The Network continues to work to bring the latest updates on the budget and legislation news that affect supporting housing to our members. You can also find the above analysis on our VoterVoice tool, where our latest advocacy alerts are housed, here. To stay updated on all our future advocacy alerts, we encourage you to sign up here.